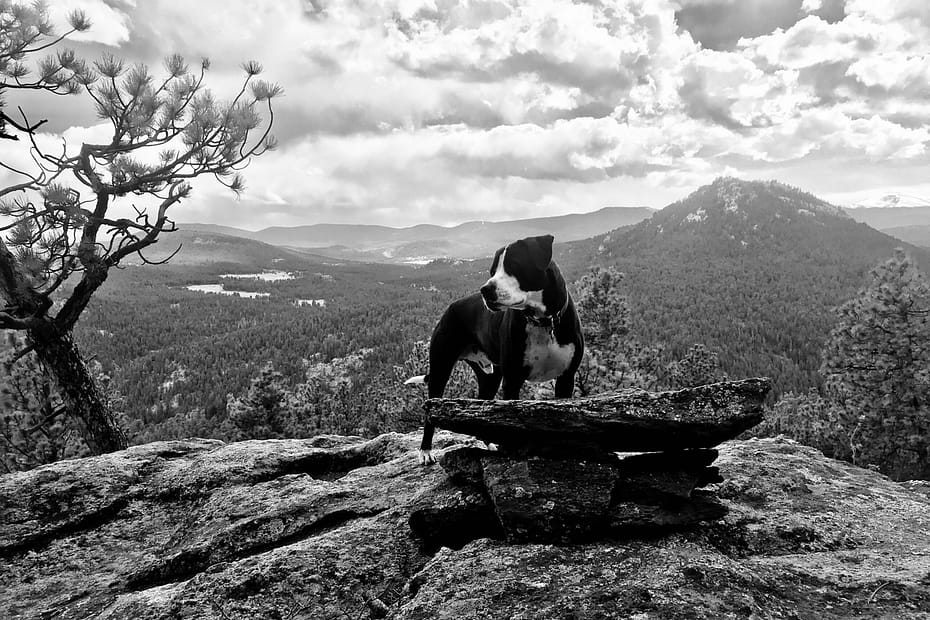 The mountain cur is a very robust, healthy, and energetic breed that descended from European stock and was bred for working outside. The breed is a medium-sized dog, averaging 22 inches in height, weighing approximately 45 pounds, and living to about 10 years of age. The dog is very intelligent and is suited for and can be trained for a variety of tasks. It is very affectionate, loyal, and protective of its family and is well suited as a house pet and watchdog. However, as the breed can be somewhat headstrong, the dog requires adequate training and a firm hand. There are a number of similar breeds that are all descended from the same ancestral line.

Curs are a collection of purebred dogs initially brought over from Europe by the early settlers and each type is unique, being cross-bred for specialized purposes. The mountain cur was bred and maintained for nearly two hundred years and considered a pioneer dog of the mountains of eastern Ohio, Kentucky, Tennessee, and Virginia where it was developed foremost for its hunting ability but also as a guard dog. However, after the start of World War II, many of the families responsible for the breed’s appearance had to leave the rural areas to work in factories in support of the war effort. Unfortunately, early settlers had little interest or time for record-keeping and by the late 1940s, the breed had started to become rare. By the 1950s their numbers were in drastic decline when four breeders came to the rescue and started a group titled the “Original Mountain Cur Breeders of America” or OMCBA, in 1957. The dog is now recognized as an official breed by the National Kennel Club.

The dog has a rough, short, dense, double coat that has brindle, brown, black, black and brindle, red and yellow color phases. The hairs will sometimes have white points that enhance the animal’s attractiveness. The dog’s head is broad and flat between the eyes and tapers slightly toward the muzzle. The cheeks are prominent and very muscular. The muzzle is heavy and broad and the bridge of the muzzle is straight. The eyes are typically dark and carry a prominent expression. Ears are short to medium in length with some lift from the base. The teeth are robust and form a perfect scissor bite. The lips are of medium thickness and hang neatly without folds at corners.

The mountain cur is a true athlete with a strong and powerful neck that tapers smoothly from the body towards the head. This allows the dog to carry his head high for improved vision when hunting in the densely wooded areas typical of mountainous terrain. The dog’s body is compact, solid, and muscular with the forequarters approximately equal in width to the hindquarters. This provides the dogs with superior agility, speed, and stamina. The chest is deep and broad with the brisket extending downward to the points on the elbows. The dogs have a strong pack mentality, love pleasing their owners, and make obedient family pets with strong protective tendencies. The dog is seldom aggressive and typically gets along well with other pets. Mountain curs are a hypoallergenic breed so they are a good breed for people who suffer from animal allergies.

How Big Does the Mountain Cur Get?

How Many Years Does the Mountain Cur Live on Average?

The mountain cur is a generally healthy breed that shows good longevity. On average, mountain curs live approximately 10 to 12 years, but there have been rare cases where the dogs have lived to reach 18 years of age. Influencing factors include care, lifestyle, and genetics.

How Much Does the Mountain Cur Cost?

While the price of a mountain cur can vary greatly, according to the National Kennel Club the typical mountain-cur puppy sells for $550. While the typical price range is between $300 and $800, puppies do sell for as low as $100 and as high as $3,500 for a single puppy with a strong hunting bloodline from a reputable breeder. Another factor that influences prices is the geographic area where the puppy is sold as prices can vary across different regions of the United States.

This is a dog that was bred for hunting and as such loves being outdoors and on the track of an animal. Mountain curs are brave and fearless and will chase practically any small animal from squirrels to raccoons, The dogs have been known to take on coyotes and stand down feral hogs, mountain lions, and even bears. The dog is highly intelligent, easily trainable, and learns eagerly. Mountain curs have been trained as water dogs to retrieve waterfowl and tree cats and as working dogs to herd cattle and sheep. However, mountain curs need a firm hand and must be properly socialized starting at the age of four to six weeks. The mountain cur is very affectionate with family members and others they are familiar with. It is generally a happy animal and gets along well with other pets. However, as the dogs are initially wary of strangers and are generally silent unless they have a reason to bark, they make excellent watchdogs.

Caring for the Mountain Cur

Being a strong and robust working dog, the Mountain Cur is typically a very healthy breed that requires very little in the way of care. Proper nutrition, freshwater, daily exercise, and a yearly visit to the vet will keep these dogs healthy and happy throughout their lifetime. While the dogs can live outside year-round in the harshest of climates when they are provided adequate shelter, they also take well to living indoors if properly trained.

Mountain Cur puppies should be fed high-quality puppy food for their first year of life. Table scraps should be extremely limited as these do not have the adequate calories, vitamins, and minerals fast-growing puppies need to thrive. After weaning, at approximately six weeks of age, puppies should be fed every four hours until six months of age and then twice a day until 12 months. Once-a-day feedings are the rule after the dog reaches one year of age. However, most animal experts agree a better policy for feeding adults is to have dried food available at all times so the dog can eat whenever it is hungry. Additionally, numerous studies have shown dogs actually eat less when their regular food is always available.

Just as with human food, not all commercially prepared dog foods are created equal and it is important to read the label to know exactly what the dog food contains. Avoid dog foods with lots of fillers like grain products like cereal. Table scraps should also be limited for adult as these will often lead to finickiness that will keep the dog from eating enough dog food. This can result in severe nutritional imbalances that can lead to major health issues as well as obesity.

How to Groom the Mountain Cur

Because of the breed’s short, dense coat, grooming with a soft-bristle brush will keep the coat clean, healthy, and shiny. Ideally, brushing should be done two to three times a week and after a run in the woods. Inspection for fleas and ticks should be performed once a day when the weather is above freezing. Ticks and fleas become inactive once the temperatures drop below 32 degrees Fahrenheit. Mountain curs don’t require bathing very often when they receive regular brushing. The exception is if the dog gets very dirty or suffers a flea and tick infestation. However, bathing too often will result in the dog’s skin drying out.

Mountain curs do not fair well in environments where they do not have room to run, such as apartment living, and must have access to daily activity to stay physically fit, healthy and mentally happy. A lack of exercise can not only lead to health issues, it typically causes boredom that often leads to complex behavior including destructiveness and disobedience. The National Kennel Club recommends mountain curs only go to homes that will use the dog for the purposes it was bred where they can receive at least 90 minutes of intense exercise every day.

The mountain cur has no breed-specific health issues and the dog typically stays very healthy throughout its lifetime with proper care. The breed should of course have the standard immunizations for rabies as well as other canine viruses as recommended by a veterinarian. Pups should be dewormed after weaning.

Breeds Similar to the Mountain Cur

The word”cur” means mongrel and because the animals were selectively bred from various breeds of dogs, there is a large number of cur strains similar to the mountain cur. However, this does not mean mountain curs, or any cur dogs, are the result of random cross-breeding. On the contrary, each breed took generations of carefully selective breeding to generate the desired traits.

Many of the cur breeds are better thought of as strains or types, with each breed having its own distinctive traits and the National Kennel Club has created a registration program for each of the recognized cur breeds. Here are three of the breeds most similar to the mountain cur:

1) The Southwestern cur is typically larger than the original mountain strain and has longer legs and a broader chest than mountain curs. This cur has strong working instincts and is used as cattle herding dogs, for hunting feral hogs, and are also used as treeing dogs for hunting raccoons, cats, and bears.

2) Southern curs were bred in Louisiana and Florida and are larger and heavier-boned dogs that have been bred to work in the swamplands to herd cows and hunt wild hogs.

3) The Southeastern cur tends to be shorter and stockier and has been adapted to working in close range to their handlers for treeing game animals.

Following is a list of some of the other similar cur dog breeds developed over the years, most of which are recognized by the National Kennel Club: