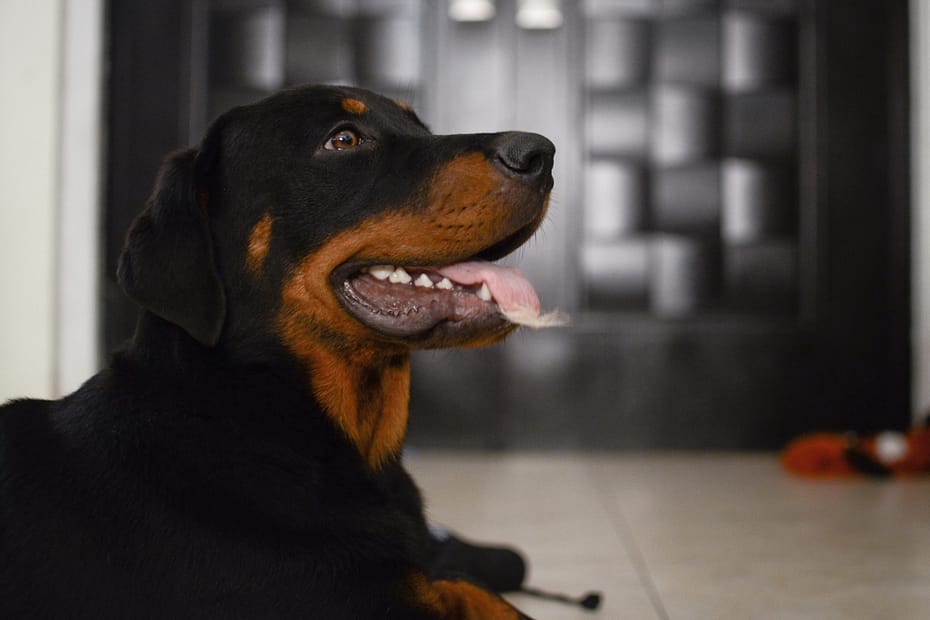 The Jackweiler is a relatively new breed of dog, although it is not formally recognized as a true breed by the American Kennel Club. The Jackweiler represents the uncommon pairing of the large Rottweiler and energetic Jack Russell and can favor either parent or appear as a true combination. Because not much is known about Jackweiler’s origins, one must consider the histories of each parent breed. Fortunately, Jackweilers frequently represent the best attributes of both stocks!

The purebred Rottweiler made its first appearance in ancient Roman legions, protecting the people and helping drive their cattle. However, they get their name from more recent German origins, where current standards were developed during natural mating with local dogs. Known first as the “Rottweil butcher’s dog,” Rottweilers were admired for their usefulness and performance as load bearers, frequently hauling meat to market. The name Rottweil comes from its town of origin, which was named so due to its notable red (rott) tiled homes (weil).

Purebred Jack Russel Terriers, like most dogs of British origin, made their debut as fox hunting dogs. Originating from dogs bred and used by the Reverend John Russell in the early 19th century, the Jack Russell terrier has gone through several changes over the years. In spite of these changes, an aggressive temperament was consistently considered an ideal quality for Jack Russel Terriers due to their original service as hunting companions. This attribute still emerges as unyielding energy. Their principal coat color is generally white-bodied, with coat textures ranging from smooth, rough or broken-coated. Jack Russel Terriers can be any color.

Because the Jackweiler is an unrecognized breed, its traits are also not regulated during the breeding process. Some puppies may resemble one parent breed more than the other, or may appear to be a perfect mixture. Regardless of other traits, many Jackweilers resemble their Rottweiler parent’s more dominant color, sporting a mostly black coat with rich brown bellies and brows. Some Jackweilers may be slightly more blended in coat color, appearing to be more of a mixed rusty brown. This breed will usually appear average height for a medium-sized dog, and has an average weight of 45 pounds. While males and females are not drastically different, you can expect a male to be slightly larger and more hyperactive.

How big does the Jackweiler get?

Because of the major differences between Rottweilers and Jack Russel Terriers, Jackweilers can weigh anywhere from 35 pounds to over 65 pounds. They typically range between 14 and 22 inches in height. Your Jackweiler may lean more toward one parent’s traits more than the other, so visit your vet regularly for weigh-ins to get a better predictor of size potential.

How many years does the Jackweiler live on average?

Jackweilers have a typical lifespan of about 10 to 14 years. Those which favor the Jack Russell Terrier most are likely to have a longer lifespan than those which most resemble the Rottweiler. In any case, with proper nutrition, exercise, and veterinary care, your dog can live a long, healthy life!

How much does the Jackweiler cost?

Despite an increase in popularity, Jackweilers are not commonly bred by professionals. Instead, many of these puppies will be found in shelters or from individual households as a result of accidental mating. Because it is an unrecognized mixed-breed,you can expect to spend anywhere from $65 to about $600, depending on where you find your new best friend! As with any unregulated breed, check local shelters before opting to spend loads of money as breeders have no specific standards to adhere to when cross breeding.

While Jack Russell Terriers are often high-energy pups, Rottweilers tend to be more docile unless provoked. This combination usually lends itself to a more medium-tempered offspring. Don’t be surprised, though, if your pup presents with a more extreme personality as they can easily take after one parent more than the other. Overall, Jackweilers are incredibly loyal pets with high confidence and self-awareness. This makes them very trainable, although they may have moments of mischievousness which will require more patience. They are excellent family dogs when nurtured with proper activity and socialization, and do not vary too widely between male and female in respect to personality. In order to prevent any kind of destructive or aggressive behaviors, this breed should be trained and socialized consistently from a young age.

Jackweilers will most likely require a lot of space, affection, and exercise. If you prefer cozy nights on the couch over a long weekend in the great outdoors, this breed probably isn’t your ideal companion. This breed is very rambunctious due to its Jack Russell roots, but boasts a size more comparable to the Rottweiler. Such a combination means a great amount of space is likely necessary. Your pup will require regular mental stimulation, socialization, and exercise. Depriving Jackweiler of these activities could not only result in boredom, but may spur destructive and troublesome habits. Training should accompany socialization and should be regular, consistent, and progressive.

On average, Jackweilers tend to be medium-tempered dogs, but you’ll need to consider which breed your pup favors most when making dietary choices. They need to be well fed with high-protein diets to meet their energy needs, so food should be properly measured rather than eyeballed. For an adult, this could mean up to three cups of dry food per day. Unless otherwise advised by a veterinarian, your dog should consume roughly 25% crude protein from food. Treats may be excellent aids in training, but should not be fed in excess. Follow the instructions on your dog’s food labels. Age is also a major factor to consider when choosing proper nutrition for your pet. Both breeds are prone to obesity if overfed and under exercised. Due to the major differences in breed sizes, some joint health issues can be expected in older age, so talk to your veterinarian about proper supplementation.

How to groom your Jackweiler

Both parent breeds of the Jackweiler typically carry short coats, usually without undercoats, making them low maintenance in terms of grooming. They require weekly brushing to help with shedding and coat upkeep. All dogs can benefit from periodic bathing. Make sure not to bathe your dog too often as this may disrupt the production of oils which keep their coat and skin healthy. Supplements can also assist with healthy coats, especially if your pup suffers from skin allergies or other discomforts. Haircuts will likely not be necessary for this breed as they are for longer hair breeds, although some Jack Russell Terriers may pass on slightly longer fur.

Activity levels for this breed are a necessary quality to take into consideration when purchasing or adopting. The Jackweiler is a descendant of the Jack Russell Terrier and the Rottweiler. While Jack Russell Terriers tend to be very active dogs who can jump extremely high, Rottweilers are often more even-tempered. Even so, Rottweilers pack a lot of muscle and still require plenty of exercise. Regardless of which parent your dog reflects most, plenty of socialization and exercise are absolutely crucial. The best environment for this breed is a large home, preferably with a yard or other source of frequent time outdoors. Such high activity levels, when not tended to regularly, could cause your puppy to become destructive. Your puppy/s mental and physcial health are equally reliant on physical activity.

As a hybrid, this breed may be prone to any of the health conditions experienced by either parent. As previously mentioned in other sections, your dog may lean toward one genealogy or the other. As such, you should take all of the potential issues into consideration when making care choices for your pet. For Jack Russel, these potential issues can include various genetic eye disorders, deafness, tooth decay, or patellar luxation (essentially, the dislocation of the knee). Rottweiler parents contribute other common complications such as hip or elbow dysplasia, cataracts, and arthritis. Risks for serious conditions may include cancer, hypothyroidism, heart trouble, and digestive disorders. Do note that some of the aforementioned complications may not be unique to this breed.

As a general rule, Jackweilers should be monitored for deafness, skin allergies, osteoarthritis, eye disorders, and cancers. Due to varying sizes and growth patterns, joint health should be kept under observation.

While no combination can truly compare to the lovable Jackweiler, some similar breeds do exist.

Primarily, the Jackador, a hybrid Jack Russell Terrier and Labrador, is the most similar dog in stature, temperament, and care. Mixed breeds with similar temperaments include the French Bull Jack, Boston Cattle Dog, and the Dalmador. If your budget is flexible, pure breeds of similar disposition include the French Bull Dog and the Great Pyrenees. Dogs with similar stature to the Jackweiler are the Labrastaff, Spanish Hound, and the Black Mouth Cure.