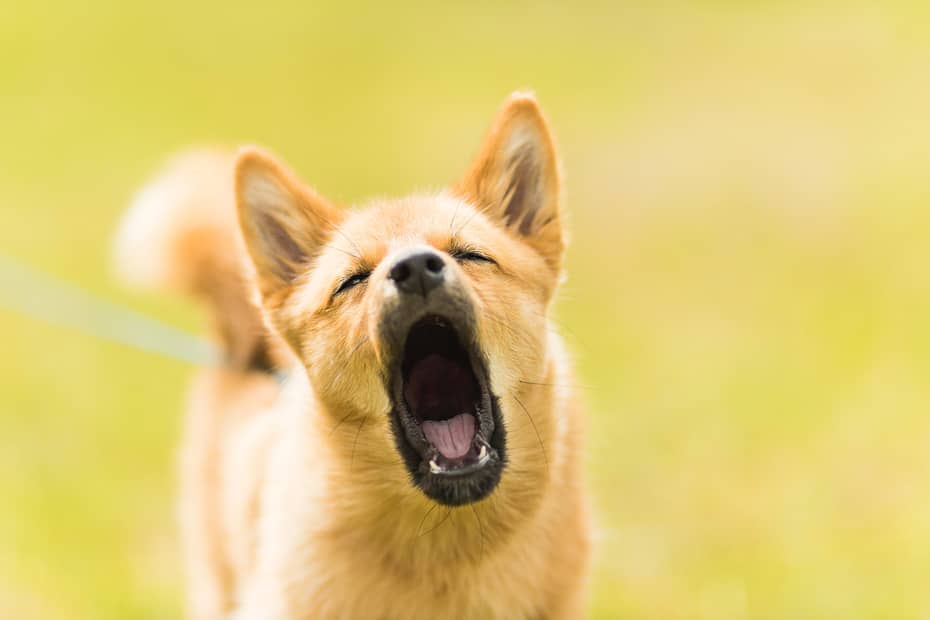 Do you ever wonder why your dog yawns? You’re not alone! My dog yawns a lot. He seems to yawn when he is tired. He yawns when he gets up from laying down. He yawns while he stretches before a run or a walk. All this yawning led me to wonder what all the yawning is about.

There’s a lot of interesting information about dog yawning that owners might not know. This post will tell you everything you need to know about the behavior, including what scientists believe its purpose is.

Meaning of Yawning in Dogs

Though we humans typically yawn when we’re tired, the reasons behind canine yawning are less clear. One popular theory is that dogs yawn in response to stress or anxiety, much like humans do. When a dog feels threatened or nervous, he may yawn in an attempt to appear non-threatening and calm.

Another possibility is that dogs yawn as a way to release excess energy or excitement. If a dog is feeling particularly playful or energetic, he may yawn in an attempt to “reboot” and refocus his energy.

Some experts believe that dogs may yawn simply as a way of stretching their muscles and joints. Regardless of the reason, one thing is for sure: watching a dog yawn is sure to make anyone – canine or human – feel a little sleepy!

Yawning Due to Anxiety

In any case, next time you see your dog yawning, it may be a good idea to take them for a walk or give them a toy to help them relieve their anxiety.

Scientists have also found that yawning plays an important role in regulating a dog’s body temperature. When a dog pants, it cools off by evaporation. But when the air is humid or the dog is already wet, panting is less effective. Yawning helps to circulate air through the mouth and nose, which speeds up the evaporation process and helps to cool the dog down.

In addition, yawning may also serve as a way for dogs to release excess energy. When a dog is excited or anxious, its heart rate and breathing increase. Yawning may help to slow down these systems and allow the dog to calm down.

Dog Yawning Before Walk or Run

It’s no secret that dogs love a good walk or run. But have you ever noticed that your dog often yawns just before heading out the door? While it might just look like your dog is sleepy, there’s actually a scientific explanation for this behavior.

When a dog yawns, it releases endorphins, which are hormones that have mood-boosting and pain-relieving effects. In other words, yawning helps to ease anxiety and excitement, two emotions that can be amped up before a walk or run. So, the next time your dog starts to yawn, don’t delay – get those leashes on and head out the door!

Seizures are caused by a sudden, excessive electrical discharge in the brain. Seizures can be brought on by any number of factors, including stress, fever, lack of sleep, and low blood sugar.

Studies have shown that dogs often yawn before having a seizure, and it is thought that this behavior may help to relieve some of the tension that builds up before a seizure. Yawning has been shown to increase blood flow to the brain and release neurochemical neurotransmitters that have a calming effect.

In addition, yawning helps to increase the oxygen levels in the brain, which can help to prevent or reduce the severity of seizures. While researchers are still working to unlock all of the mysteries surrounding seizures, it is clear that yawning may play an important role in helping dogs to cope with this condition.

Yawning is a normal behavior in dogs that can be associated with many different things, including boredom, stress, fatigue, anxiety, and even excitement. While it’s usually nothing to worry about, frequent yawning can sometimes be a sign of an underlying medical condition.

If your dog is yawning more than usual, it’s important to pay attention to other changes in behavior or appearance. If your dog is also showing signs of illness or distress, such as lethargy, vomiting, or diarrhea, then it’s best to consult with your veterinarian. While yawning itself is not usually a cause for concern, it can be a helpful clue in identifying other health problems in dogs.

When a dog yawns, they often shake their whole body at the same time. This is called a “yawn shake,” and it is a way for dogs to release tension and stress. Yawning is contagious, and just like with humans, dogs will often yawn when they see another dog yawning. This is because yawning is a way to communicate that they are feeling calm and relaxed.

Dogs yawn in your face for a variety of reasons. Sometimes, it’s simply a way to show affection. Other times, it may be a sign of stress or anxiety. And in some cases, it could be a way to get your attention.

Whatever the reason, dogs seem to know that yawning is contagious. So when they see you yawn, they can’t help but follow suit. While it may be annoying at times, there’s no need to worry if your dog yawns in your face. It’s just their way of saying hello.

There are many reasons why dogs yawn, including anxiety, regulating body temperature, and stretching before exercise. Next time you see your dog yawning, take a moment to think about what might be causing it. And if you’re ever concerned about your dog’s health, be sure to consult with your veterinarian.