4 Things Dogs Shouldn’t Drink and 4 They Can 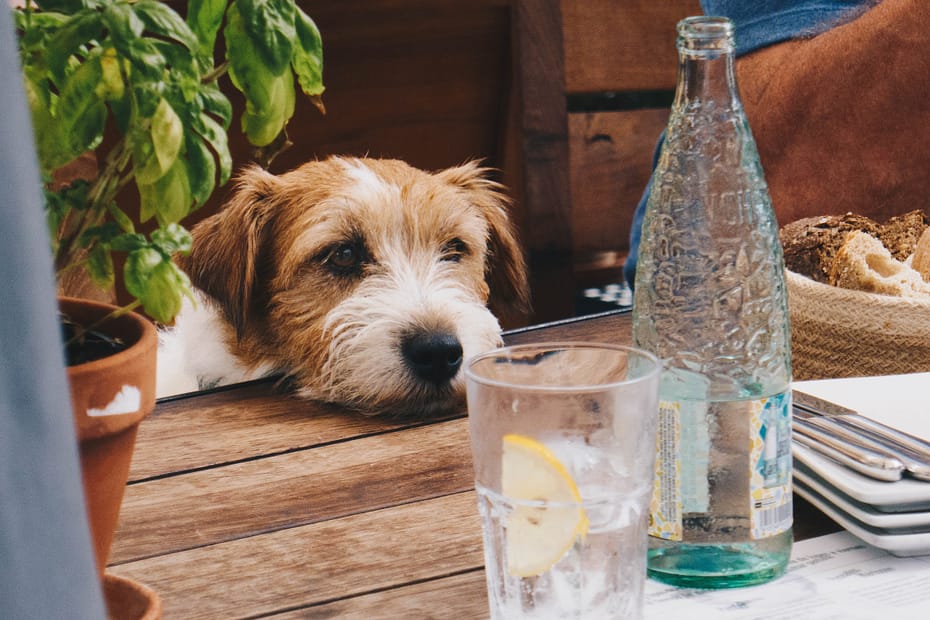 What can dogs drink?

It has happened to all of us as dog owners. We are casually spending time as a family or with friends when all of a sudden we realize our dog has gotten into something that he or she is not supposed to. Sometimes our dog laps up a drink before we even know they are doing it. In these situations, we often wonder what can dogs drink? Is the liquid they just drank poisonous to them?

The answer to these questions is not as simple as you might think. While water is the best thing for your dog, there are many other liquids that your pup can have in moderation.

Dogs can drink milk, but only in small amounts. Milk contains lactose, which is a sugar that dogs cannot digest. When a dog drinks too much milk, it can cause an upset stomach and diarrhea. If your dog has a sensitivity to lactose, he may experience these symptoms even if he drinks a small amount of milk.

Almond milk has become a popular alternative to cow’s milk in recent years, but can dogs drink it? The answer is yes, almond milk is generally safe for dogs to consume. However, there are a few things to keep in mind.

First, almond milk does not provide the same nutritional benefits as dog food, so it should not be used as a meal replacement.

Second, almond milk contains high levels of fiber and fat, which can cause digestive problems for some dogs.

Finally, most almond milks contain added sugar, which can lead to weight gain or other health problems if consumed in large quantities. As a result, almond milk should be given to dogs only in moderation and as part of a healthy diet.

Coffee is another beverage that should be given to dogs only in moderation. Coffee contains caffeine, which can be toxic to dogs in large quantities. When a dog drinks coffee, the caffeine stimulates his central nervous system and can cause restlessness, rapid breathing, and an increased heart rate. In severe cases, it can cause seizures and death.

While most people think of tea as a beverage for humans, the truth is that dogs can also enjoy a nice cup of tea. In fact, green tea, peppermint tea, and chamomile tea all offer a variety of benefits for our four-legged friends.

Green tea is rich in antioxidants, which can help to protect against cancer and other diseases. Peppermint tea can help to settle an upset stomach, and chamomile tea is known for its calming properties.

Of course, it’s important to avoid adding any sugar or other additives, as these ingredients can be harmful to dogs. But as long as you stick to plain, unsweetened tea, your dog can enjoy a refreshing cup alongside you.

Soda is not good for dogs because it contains caffeine and sugar. Caffeine can be toxic to dogs, and too much sugar can cause obesity and other health problems.

Many people believe that soda is bad for dogs, but the truth is that it really depends on the type of soda and the amount consumed. For example, caffeinated sodas like colas can be harmful to dogs because they contain caffeine, which is a stimulant. Too much caffeine can cause vomiting, diarrhea, increased heart rate, and even seizures.

Diet sodas are generally considered to be safer for dogs, but they can still cause stomach upset. In addition, sugary sodas can promote tooth decay and contribute to obesity. So while a small amount of soda may not hurt your dog, it’s best to err on the side of caution and avoid giving them any at all.

Dogs are one of the most popular pets in the world and for good reason. They’re loyal, affectionate and full of personality. But can they handle their liquor? The short answer is no.

Alcohol has the same effect on dogs as it does on humans, only magnified. Dogs are much smaller than humans, so they don’t have to drink as much to feel the effects. Even a small amount of alcohol can cause vomiting, diarrhea, central nervous system depression, difficulty breathing, and even death.

So next time you’re tempted to share your beer with Fido, think twice. It’s not worth risking your best friend’s health.

While most people believe that it is unsafe for dogs to consume alcohol, the truth is that the effects of beer on dogs depend on a number of factors. For instance, the type of beer consumed and the size of the dog are both important considerations.

Generally speaking, darker beers tend to be more harmful than lighter beers, and small dogs are more susceptible to the effects of alcohol than large dogs.

That being said, it is generally best to avoid giving beer to dogs altogether. In addition to potentially causing health problems, alcohol can also make dogs very tired and lethargic. As a result, they may be less able to play and exercise, which can impact their overall health and wellbeing.

Many dog owners have probably wondered at some point if it’s safe to let their furry friend have a sip of wine. After all, dogs are known for being pretty enthusiastic about food and drink, and wine is often seen as a treat for humans.

However, it’s important to remember that dogs have a different metabolism than humans, and what may be safe for us to consume can be potentially dangerous for them. In general, it’s best to avoid giving your dog any alcoholic beverages.

Wine contains ethanol, which can cause vomiting, diarrhea, and even difficulty breathing in dogs. In severe cases, ethanol poisoning can lead to death. So while it may be tempting to let your dog share in your wine-drinking experience, it’s ultimately not worth the risk.

While Gatorade is primarily marketed toward human athletes, many dog owners have wondered if it is safe for their furry friends to drink.

In general, the answer is yes – Gatorade can be a good way to replenish electrolytes and fluids in dogs who are feeling dehydrated. However, there are a few things to keep in mind.

If you keep these things in mind, then Gatorade can be a helpful tool for keeping your dog hydrated and healthy.

While most people think of water as the only beverage safe for dogs to consume, there are actually a variety of juices that can be beneficial for your furry friend.

Of course, it’s important not to give your dog too much juice – a small cup per day is sufficient. And always be sure to check with your veterinarian before making any changes to your dog’s diet.

Now you know the types of drinks that are safe for dogs to consume, as well as the ones that should be avoided. It is important to keep in mind that just because a drink is safe for humans to consume, doesn’t mean it is safe for dogs. Always consult with your veterinarian before changing your dog’s diet.